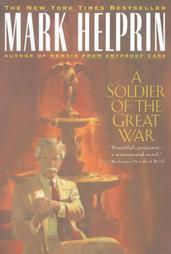 Last week, I posted a blog post about doing a New Standards of Fiction list.  I wanted this list to represent every genre for works published in the last 20 years.

I received quite a few responses and thanks to everyone who gave me their recommendations.

1) Black Echo by Michael Connelly: The first novel in the acclaimed Harry Bosch series.  This book is one that started it all and Michael Connelly is one of the best crime novelists writing today.

2) The Opposite of Art by Athol Dickson: This novel about a great artist’s spiritual conversion is one of the best books I’ve read in 2012. Dickson wrote an excellent novel about murder, love, relationships, and the collision of art and faith.

3) The Testament by John Grisham: This is one of the surprises on the list. Grisham’s novel about redemption, belief, and the consequences of wealth on a family is considered one of his best.  I agree.

4) A Soldier Of The Great War by Mark Helprin: Mark Helprin is one of our very best writers in modern fiction.  This novel about Alessandro Giuliani’s life is wonderfully told, beautifully written, and is vintage Helprin.

5) Bag of Bones by Stephen King: This is another surprise on the list. Many considered this novel as King’s most literary with his usual mixture of thrills and chills.

6) Odd Thomas by Dean Koontz: Well, if I have Stephen King on this list….I guess could not leave Dean Koontz off of it.  Odd Thomas is considered one of Koontz’s best characters is recent years and this book begins the Odd Series.

7) The Border Trilogy by Cormac McCarthy: This trilogy of All The Pretty Horses, The Crossing, and Cities Of The Plain brought Cormac McCarthy out of obscurity and catapulted him into being considered one of American’s modern literary masters. The coming of age stories of two teenage ranchers from West Texas is unlike anything you have read.

8) White Butterfly by Walter Mosley: This is the third book in the Easy Rawlins mystery series set in 1950’s Los Angeles and takes readers into a world where most mystery novelists haven’t gone.  Mosley has created one of the most original characters in the mystery genre and the series explores race and crime in an honest and unique way.

9) Trophy Chase Trilogy by George Bryan Polivka: Polivka’s excellent trilogy{Legend of The FireFish, The Hand That Bears The Sword, & Battle For The Vast Dominion} about pirates, adventure, and faith given a freshness and originality to Christian Fantasy and Fantasy literature as a whole.

10) Night Watch by Terry Pratchett: The author of the voluminous Discworld novels has written what many have called his best book of the series yet.  Also, this novel is a good entry point for those of us who are new to Discworld.

11) Gilead by Marilynne Robinson:  A touching novel about fathers and sons told by a minister deals with spirituality and human nature in a profound way. This highly acclaimed novel is truly unforgettable.

12) The Sparrow by Mary Doria Russell: Another surprise novel on this list. The story of future Jesuits being the first “missionaries” to make contact with the first sentient alien species discovered is intriguing to say the least. Russell has taken the “first contact” theme and added an original twist to it.

13) Lying Awake by Mark Salzman: This is a delightful but powerful little novel that reaches the depths of a woman’s soul, and in so doing raises important questions about the power of God and faith.

14) To Say Nothing Of The Dog by Connie Willis: This novel combines comedy, mystery, science-fiction, romance and time-travel into one delectable story.

15) The Book Thief by Markus Zusak:  This YA novel has been one of the most well-received novels in the last few years.  The story of a girl growing up in Nazi Germany and stealing books in order to learn how to read and survive has been a major hit with readers: adult and young adult.