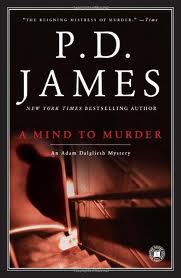 P.D. James has been given the unofficial title, Queen of Crime, and after reading A Mind to Murder showed why she has earned this moniker.

A Mind to Murder began with the murder of Enid Bolam, the administrative head at the Steen Psychiatric Clinic in London. She had a chisel through her chest and a wooden phallic symbol in her arms. It appeared like we have the main culprits of sex and violence intersecting once again.

When Adam Dalgliesh arrived to investigate the murder, he found out that Miss Bolam was a goody, two-shoes stickler and having that phallic symbol was a ruse put there by the murderer. The detective was put through various twists and turns until the mystery of Miss Bolam’ death was solved at the end of the novel. Even though, that’s a simplistic overview of most mystery novels, James has really elevated the genre to show that literature can emerge from the murder mystery story.

Her ability to write beautiful passages of setting and place, to have excellent narrative flow, to create solid characters and to have the main character’s personality be revealed like a chef peeling an onion has made me want to read the entire Adam Dalgliesh oeuvre.

This is my second Adam Dalgliesh book I have reviewed for the blog. I reviewed Cover Her Face last year and both books have given me a wonderful reading experience even though they were published in the early 1960’s. A Mind To Murder does have its antiquated values interspersed throughout the novel, but James still deals with the universal themes of death, greed, and ambition that we can all relate to.

I can unabashedly recommend A Mind To Murder and I’m already looking forward to reading and reviewing Unnatural Causes, book three of these delightful novels.