This year’s version of the San Antonio Spurs entered the NBA Playoffs as the number one seed in the Western Conference with a 50-16 record (tied with the Chicago Bulls for the league’s best record) in a 66 game shortened season.

And winning last night’s game against the Utah Jazz, 102-90, gives the Spurs a commanding 3-0 series lead in the 1st round of the playoffs. They will go for the series clinching win in Game Four on Monday night.

The Spurs are respected and even admired by most basketball analysts and media pundits. However, they seem to get overlooked in the eyes of Spurs fans as not getting enough love from the public and media as a whole.

I have lived in San Antonio for nearly nine years and I’ve heard it all on that front by Spurs fans. But, I do believe some of it is Spurs fans paranoia for this perceived lack of attention.  It reminds of this quote:

“People would rather be recognized and appreciated for their contributions than ignored or overlooked even if they are wealthy.” (Aaron Johnson)

Those words ring true to me and I believe in many Spurs fans’ ears.  Well, let’s look at some reasons and why I’m a fan because of it.

—They have won 774 games out of 1100 during that period.  That is a 70% winning percentage and the highest in the NBA during that span.

–They have averaged 55 wins a season during this period and that’s the highest in the NBA as well.

–They’ve had one coach for the entire time: Gregg Popovich

–They’ve had one superstar for the entire time: Tim Duncan

–They drafted two other stars to compliment the superstar player in Manu Ginobili (Since 2002) and Tony Parker (Since 2001) and found role players from Steve Kerr to Danny Green to fit their system.

With all these accomplishments and success, it seems outside of the San Antonio Metro Area (which includes the Rio Grande Valley down to the Texas/Mexico border and West Texas to El Paso), the Spurs are not beloved or hated (Well in Phoenix, they are) like the Yankees, Cowboys, Lakers or Celtics.

The main reason for me is that consistency or stability doesn’t sell in a culture that wants drama and conflict as a form of entertainment. I wrote about this in my article, Why Tim Duncan is My Favorite Athlete.

Consistency and Stability are boring to the public but are so hard to obtain in everyday life. That’s one of my reasons why I’m a fan. There is genius in consistency and stability and it deserves appreciation just like other traits for success.

Also, I believe the San Antonio Spurs are like Smooth Jazz.  Brilliant, technical, talented but are inoffensive in a world where people are expected to be offended.

Even though they are some real artists playing smooth jazz like George Benson, Ronny Jordan, Marc Antoine, Joe Sample, or The Yellowjackets. The genre is considered bland or vanilla and the Spurs have been accused of playing bland (code word for “fundamental”) basketball.

Unfortunately, perceptions die hard because the Spurs have been anything but bland this season.  They have changed their trademark defensive-oriented style in the past for a more free-wheeling, high-tempo offense that was second in the league for points per game and first in offensive efficiency. These are not your father’s San Antonio Spurs!

Also, the other reason why I’m a fan of this team, that it shows me the little guy can compete with the big boys at the highest levels of competition.

Like the Spurs, the city of San Antonio has been overlooked as a major American city. Tuck down here in South Texas, people forget its the seventh largest city in the country with 1.3 million (surpassing more glamorous cities like Dallas, Atlanta, and Miami.)

Even in the Lone Star State, San Antonio gets overshadowed by Houston and Dallas (and Austin to some extent), but has grown quietly in the shadows and become “Military City, USA” and a major American city because of it.

I do believe that sports can mirror real life at times and being a San Antonio Spurs  fan has shown me that consistency, stability, and finding the right people can work in any location in order to compete at the highest levels in any profession.  That’s an American success story exemplified.

Go Spurs Go and Let’s Get Number Five for the Thumb!!!!! 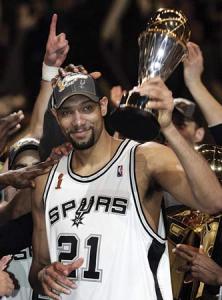 Moreover, he is a two-time NBA MVP, Rookie of the Year, three-time NBA Finals MVP, nine-time All NBA 1st Team, eight-time All Defensive 1st Team, All Star MVP and 4 NBA Championships on his resume.

With all these accomplishments to an incredible career, I know some of you are wondering what other reason would Tim Duncan be my favorite athlete?

There is one word for me: Consistency

Somehow in our current culture, we have overlooked and undervalued the role of consistency in creating greatness. We all believe greatness comes from being dynamic or spectacular, but not from consistency.

Tim Duncan represents the perfect vehicle to show how consistency is greatness and that we should appreciate it more when we see it in our lives.

He has never had the high-flying attack of a Kobe Bryant or Michael Jordan and currently Blake Griffin or the dramatic flare of a Magic Johnson or the brute strength of Shaq or Karl Malone and now Lebron James.

Duncan has done with smarts, excellent timing and antipication and doing it over and over again the same way for 15 years.  So much so that Shaq gave him the nickname, “The Big Fundamental” as a compliment. I have never heard the word, fundamental, ever being used as a compliment.

The question is why has consistency while respected but overlooked just like Tim Duncan has been for his career?

Unfortunately, being consistent in anything is considered boring or dull (one of the criticisms of Duncan) and also if you are consistent then you are considered more of a craftsman than an artist.   You are more like a blacksmith or jeweler instead of a Picasso or Van Gogh.

Moreover, NBA Basketball is the only professional sport where one individual can dramatically affect the outcome in a team concept and can create an image in the public’s mind that’s nearly unshakeable.

We have been spoiled by Dr.J in the 70’s, Magic and Bird in the 80’s, Jordan in 90’s, and Kobe Bryant and Lebron James in the 2000s with their dramatic and spectacular play.  While Tim Duncan has chiseled away at his greatness like an ax chopping down a huge tree.

Also, I believe Duncan is like a Honda Accord or Nissan Maxima. While everyone respects these cars on how well made they are, but no one desires them as their dream car. However, both cars have lasted over 20 years in an extremely competitive car industry where flashy cars have come and gone.

Well, I have appreciated his career and the fact that he has a hand in (along Coach Popovich) creating the winningest franchise (San Antonio Spurs) in all of North American Professional Sports since the beginning the 2000 decade.

He has helped create a passionate fan base in this South Texas city of San Antonio and for the entire region down to the Texas/Mexico border. Also, as his career is winding down and coming to a close, people are beginning to realize how good he has been in his career and up and coming big men like Roy Hibbert of the Indiana Pacers, DeMarcus Cousins of the Sacramento Kings, Tristan Thompson of the Cleveland Cavaliers have all considered Duncan as their role model (and even mentor) on how to have an excellent NBA career.

In closing, I wanted to write a blogpost about my favorite athlete and appreciate that he has shown all of us that being consistent is greatness too.  And greatness can’t be overlooked no matter what kind of package it comes in.