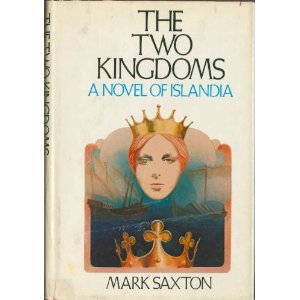 Last year, I posted a review for the book titled, The Islar, by Mark Saxton. It was a sequel to the underground utopian novel Islandia by Austin Tappan Wright. Saxton wrote two more novels in the Islandian universe and this review of The Two Kingdoms is a prequel to Islandia.

The Two Kingdoms tells the story of Frare, a young officer in the Islandian Navy. He is caught in a power struggle between Queen Alwina of Islandia and King Tor of Winder.

Queen Alwina is the first queen in Islandia’s history. She just took over the kingdom from her father, King Alwin, who recently passed away. King Tor of Winder is the queen’s neighbor and ally against another kingdom on the Islandian continent who wants to remove her from power. However the queen (who barely is in her twenties) is headstrong, passionate, and manipulative has created a contentious alliance with King Tor.

Frare has to become an ambassador for both sides to make sure that Queen Alwina and King Tor work together to defeat the enemy who wants to take over all of Islandia.

Islandia’s utopian paradise is in jeopardy again from being controlled by the outside world. However, Queen Alwina’s actions make a target for assassination and Frare must do all he can to save her life and keep the alliance with King Tor.

This book was enjoyable to read and it takes me away to a world unlike anything I’ve read in contemporary fantasy fiction.

I have to write that Queen Alwina believed a in New Age type of God called Om that was disconcerting.  But in the context of the novel, it was believable.

As I wrote in the review for The Islar, Saxton has written another terrific novel in the spirit of Islandia. Unfortunately, this book is out of print as well. And you will have to go to library to find it or a buy a copy from Amazon like I did.

I’m glad I did buy it and hope someday this novel along with the other Islandian books are back in print. The Islandian universe deserves a wider audience.